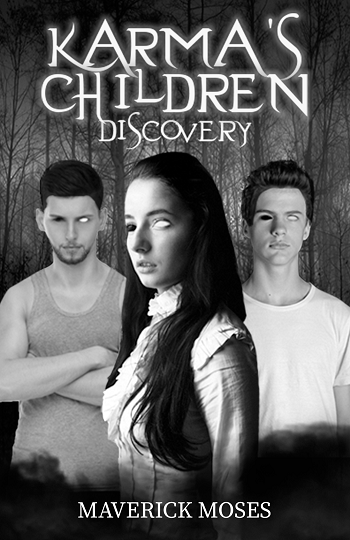 It’s been a while, but I’m finally back with another book review! I had the privilege of reading an advanced copy of Maverick Moses’ dark fantasy debut, Karma’s Children: Discovery, in exchange for an honest review. I’ve followed Maverick on social media for some time now and love his YouTube videos. I’ve also very much enjoyed watching the evolution of his creativity on Instagram. That said, the following review is my personal opinion of his book, and I’ve tried to be as unbiased as possible.

The story revolves around high school siblings Krista, Klause, and Kevin. Their mother, Karmasha, spends long periods away from home “working.” As they begin the new school year, the teens witness some unfortunate logic-defying incidents. They begin to theorize that they somehow utilized the power of karma due to their heightened emotions and unspoken wishes right before the events. Little do they know that this is a family trait and their mother has kept a big secret from them.

First of all, I thought the concept of the story was quite interesting. When we talk about karma in today’s society, the idea is that it’s this detached, non-personal, mystical force that eventually pays people back in kind for their actions. Turning karma into an actual person, who walks among us with the ability to repay good or bad behavior in an instant, makes one pause and reevaluate the potential consequences of one’s actions in a more immediate way. Additionally, as a personal note, I can’t imagine being the person responsible for determining guilt and meting out punishment. I’d much prefer the idea of only handing out good karma.

[MINOR SPOILERS: One of the key points in the story is that the kids are unique due to the fact that there has never been more than one successor at a time. They are also manifesting their abilities earlier than any other descendant of Karma. This has the spirits of the Council of Twelve on high alert because they have specific plans in mind for the kids. The light and dark spirits work to influence the siblings toward their causes while they keep Karmasha busy elsewhere. We don’t get an answer on why the three of them seem to break the mold yet, but it certainly upsets the status quo.]

The siblings are normal kids with normal problems in the beginning. Their personalities and interests are well-established through the book, and their individual struggles are what influences how their power first manifests. Their reactions give the reader a sense of which path they may take, but I’m curious to see if having power causes any major changes in any of them as the story progresses. Power can either be a useful tool or a great temptation depending on the person who wields it. I’m particularly interested in Kevin’s future story arc. He’s a quiet, amiable character who tries not to cause trouble, but those are sometimes the ones you have to watch.

I liked Karmasha’s backstory and I hope we’ll get to see more of her in the second book since she was gone for quite a while. It’s clear that she wants the best for her kids and is trying to protect them from the family secret. Krista’s take-charge protectiveness toward her brothers and Kevin’s empathy are also endearing. (I hope that Kevin holds onto his kindness as the story goes on…) I’ll have to wait and see what happens next, but I didn’t end up feeling very invested in Klause in this book. He does seem to be a major player, though, so maybe the sequel will give me enough time to get to know him.

I wish that the book had undergone at least one more round of edits due to some pacing issues and general wordiness. The story is good, but it took me a few chapters before I was able to get into the flow of things. Some parts felt like they needed more time to play out and I had to fill in the missing pieces. In particular, some relationships matured too fast and people seemed to be in each other’s confidences almost overnight. Other parts had more explanation than was necessary and could have been trimmed down for better effect.

Ultimately, I did enjoy this story and I want to know what happens next. It would have been an easier read with more editing but it wasn’t difficult to get to the heart of the story. The concept is fascinating and the climax sold me on reading the second book. Karma’s Children: Discovery is a good beginning to a potentially great series. If Maverick can invest a little more time into polishing up the next one, his story will shine. I’m excited to see where things go in the sequel, Karma’s Children: The Veil of Kathrepta.

I give Karma’s Children: Discovery 4 stars!

To learn more about Maverick and his books, click here!