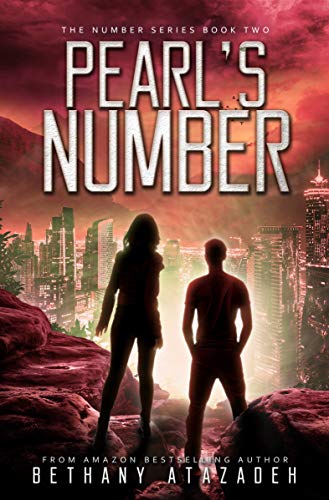 It’s here! My review of the sequel and conclusion to Bethany Atazadeh’s debut novel, Evalene’s Number! I have to say that Pearl’s Number was the one book that I was dying to see released last year. If it wasn’t for the chaos of the last few months, I would have  had it finished the day after it came out. Once my very full plate cleared, I did have it done within a day!

A quick warning, while I usually try not give any spoilers that reveal the plot progression, I wasn’t able to fully hold to that ideal this time. If you continue reading, be warned that there are a few small spoilers ahead. Nothing big, but I’d rather not have you read if you don’t want anything given away. If you haven’t read the Numbers Series yet, you can check out my review of the first book here.

The premise of the book is that Evalene discovers her mother didn’t die during the Bloom Rebellion as everyone had been led to believe. When Evalene learns this, she’s determine to search for her mother and find out what happened to her. In order to do that, though, she needs the help of her friends. The journey ahead will be difficult, and possibly dangerous, but Evalene needs to know what happened to Pearl. And, if possible, bring her home.

Honestly, I loved how determined Evalene was in this book. She’s grown a lot since we saw her last, and has much more of a go-getter attitude this time. The characters felt like they were well developed and had their own strengths and weaknesses. Some of their antics/reactions were hilarious. Sol, the former Regulator, is afraid of flying, which they must do to begin their journey, and Olive previously hacked into a government database because she was bored! (The latter skill definitely comes in handy during this particular adventure.)

I was on the edge of my seat regarding the relationship that seemed to be building between Evalene and Jeremiah in the first book. Some time has passed and we find that Jeremiah disappeared for awhile, which left Evalene wondering what his feelings really were towards her. I’m not going to share details, but I’ll say that I may have totally made happy screeching noises at some point in their story… The biggest lesson here is that one should actually talk to people when there are questions regarding feelings. Saves a lot of time that could be spent in happier pursuits!

I enjoyed the visuals of the world and the fact that all of the characters held their own as individuals. The story felt real. Real people, reacting in a real way, to bigger than average problems. There was futuristic technology, drastically different geographical features, and a return of a particularly abhorrent human practice that set this apart from what is typically experienced in the United States today, and our main characters are motivated to make the world a better place once they experience it/are exposed to it.

Evalene’s character development takes an interesting turn in the beginning. After the events of the first book, she is given a place on the Council and must learn to be a leader. This is something that’s difficult for her because of her years as a low number but she manages to a certain degree. However, once they’ve embarked on their journey, she must learn to step back once more and let Jeremiah lead when they’ve left the confines of Eden. He has the experience in Old York and she realizes that things work differently there than they did back home. Once they move on, the group works together because they’re all in unfamiliar territory. I really loved that they leaned on each other’s expertise throughout the journey.

I think what I love most about Bethany’s books, at least so far, is that she takes the normal and fits it into the grander story. Evalene wants to save her mom. Jeremiah, Olive, and Sol want to help because they care about Evalene and each other. Pearl wanted to help people who were being treated as slaves. Their stories start with normal desires and they happen to find the bigger story on the way. Best of all, each character has their time to shine. No one really feel like a sidekick.

The ending caught me off guard, which was a pleasant surprise. I had a vague sense of what was going to happen, but it went one step further than I anticipated. I always appreciate when an author can allude to something and still take me for a ride at the end. All in all, this was a highly enjoyable book, an easy read, and a satisfying conclusion to the Number’s Series.

For more information about the Numbers Series, check out Bethany Atazadeh’s website here!